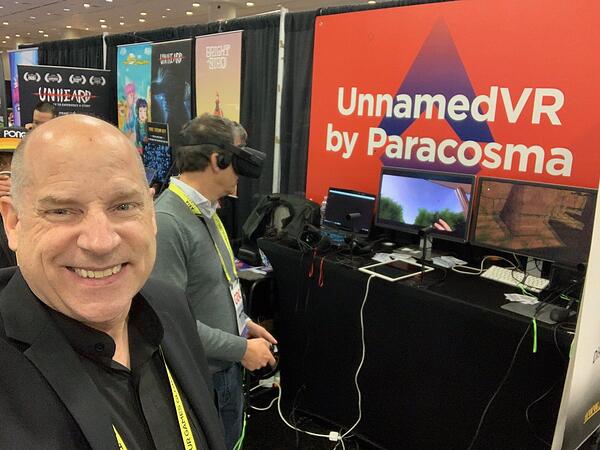 The annual Game Development Conference held in San Francisco, March 18-22, 2019, is one of the biggest game development events.  GDC is centered around the latest technologies, exciting announcements and learning/networking opportunities.

The upcoming consumer VR game, UnnamedVR, designed and developed by Paracosma Inc, was previewed at Paracosma’s booth this year at GDC.

Unnamed VR is an open-ended sandbox game in which the only goal is to explore and have fun in VR. The setting is a large mansion with many rooms.  In the “regular rooms” most objects are interactive so you can pick up, juggle, throw or place any small objects. The vases break. The drawers and cupboards open.  Then there are a number of “mini-game” rooms, such as the adventure room with zip lines, trampolines and climbing walls, the music room, the ping pong room, archery in an old-west stockade, a shooting gallery, an endlessly reconfiguring maze, the graffiti room, the 3d painting room, and the toy room.  Unnamed VR will launch initially on Oculus Rift, HTC Vive and Steam VR.

Every year, GDC showcases professional developers with cutting-edge product demos and the biggest names in game development – from creative experts to developers and business leaders for panel and roundtable discussions.