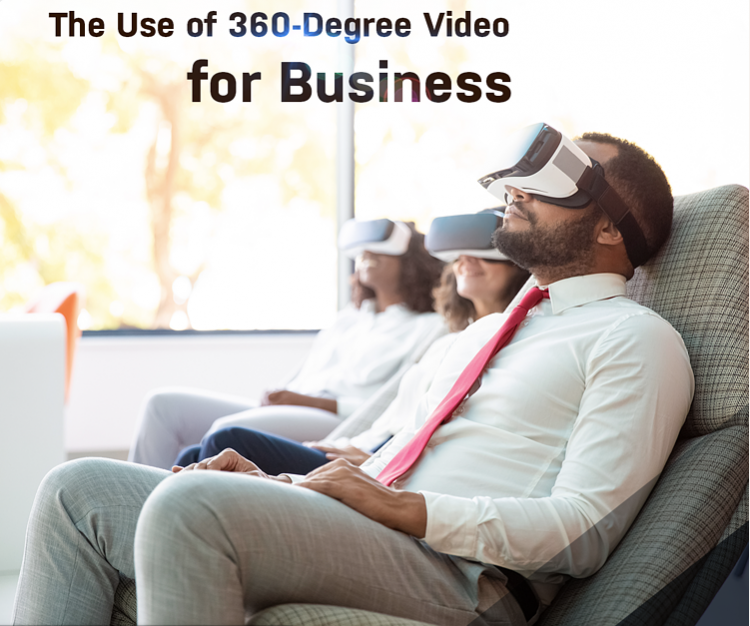 What is the first thing that comes to mind when you think about the 360-degree video? A large group of people will tie 360 videos with travel videos.

The truth is, as technology progresses, the 360 media landscape is gradually evolving with more applications and software surfacing every day. The new evolving technology of 360 media unites virtual reality, video, live streaming, and video marketing.

Every year businesses are finding ways to grow through the adoption of new technology, such as implementing 360 video and virtual reality technology for marketing. Businesses who have implemented 360 VR experiences have already discovered the benefits. The question is now how can these technologies be used for the benefit of your business? And, whether or not to implement the latest technology to capture those benefits for your business?

There are a variety of uses of 360 VR experiences for businesses to implement for offering better customer experience, to optimize time, offer unique content, and be more competitive.

It is true that travel and destination marketing is the first connections people often have with 360 videos, it is also true that entertaining 360 VR content generates more audience.

Compared to standard format videos, 360 videos used in marketing have a much higher click-through rate, increased number of views and shares, according to Hootsuite.

A 360 video allows users to experience a full 360-degrees panorama of the viewed location. For destination marketing, 360 experience is a powerful medium because it can transport viewers anywhere in the world with a sensation that they are actually in the real location. YouTube, Vimeo, Facebook and Blend Media now support 360 videos.

Using 360 videos on social media is not yet a common practice for most companies. However, when it comes to publishing large event content, 360 VR is a great idea. 360 VR is one of the most compelling ways to generate user interest and bring them to your event productions.  Whether it be live music festivals, corporate training or conference keynotes – immersive 360 video increases viewership and allows users to tune in to the events from all over the world. With a view of both the main presenters and the audience reactions, it is one of the few mediums that can capture and convey the excitement and passion of a live event as if one was attending themselves.

VR provides a unique immersive platform for organizations to set up a distraction-free corporate training virtual environment for their employees. It can also save costs on travel, facilities and equipment, as VR environment can occur at multiple locations simultaneously.

Similar to 360 live streaming, producing 360 music videos continues to grow and evolve. Based on the current state of VR/360 technology, complete replacement of the traditional format of the music video by 360 has still a long way to go. Standards for traditional 2D movie making need to evolve and adapt to the new medium. The director loses precision in

guiding the viewers’ attention and focus. However, from the audience perspective, 360 videos are a more active experience than watching a flat-screen. The 360 VR format offers viewers the freedom to explore a complete 360 field of view as they would if they were actually present.

360 video tours are more convincing when it comes to showing real estate properties, industrial tours or commercial buildings. The immersive video gives the viewer a complete and detailed sense of presence in any building. Rather than a perfectly crafted single frame view, the viewer can see what a location is really like. This lowers the possibility of false expectations and wasted time. Whether previewing residential homes for sale, or AirBnB vacation rentals, or even concert theater seats, the technology offers a rare honest perspective for the clients. More and more commercial construction projects are also using live-streamed 360 videos to provide investors and construction managers real-time remote access to building sites to observe progress and protect assets.

From the perspective of an employee candidate, few experiences provide a better feel for a company than an in-person company visit. The next best thing at the early stages of the recruitment process is the opportunity to take a 360-video tour of a company and its offices. Once an employee is hired, 360 video provides the further opportunity to give the new employee a detailed tour of the work facilities. These tours can include virtual face-to-face meetings with key company executives in their offices, providing a rare opportunity to ‘meet’ busy leaders and convey company culture and wisdom to a new generation of workers. Once on the job, 360 video and fully interactive CGI-based VR provides unparalleled training potential. Compared to listening to a lecture, watching traditional videos, or seeing a demo, experiencing work through VR provides the closest experience to hands-on training at a fraction of the cost.