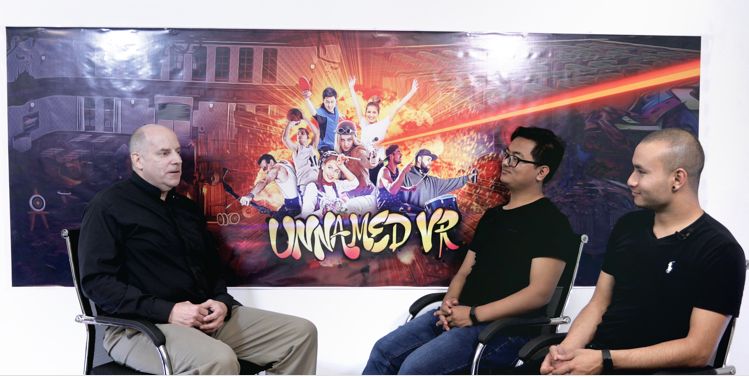 Since the year 2000, I have been a venture capitalist, investing in and helping grow startup technology companies.

At the start of 2016, I was able to visit Kathmandu for the first time and I gave a presentation on entrepreneurism.  In the audience were Bibek Thakuri and Sheetal Maharjan.

They had created Nepal’s first VR game.  It was an escape puzzle horror game, called Unnamed VR.  In the game, you had to escape from an abandoned insane asylum.  You started in one room with 4 or five doors.  Each door would lead to a hallway or another room, each with 4 or 5 doors.  It was dark and creepy and scary, and you had to explore using a flash-light with dying batteries.  The trick was each time you played the game, it would reconfigure with a different floor plan of rooms and doors.  In all the times’ people play the game, only one ever escaped.

What was exciting about this meeting, was not just the game. But Bibek and Sheetal were a really unique pair.  They had a huge passion for games.  They started playing together when they were young and would find themselves saying “this game is fun, but it could be better.” So, they taught themselves how to make games.  That was their passion.

So, when I started Paracosma, my first goal was to hire them to run our gaming department.

When they joined Paracosma, we set out to develop a commercial version of Unnamed.  But, instead of using mobile VR, we decided to take advantage of the power of PC-tethered VR headsets.

As we worked on the game it morphed from an insane asylum to a large mansion. We were then trying to figure out why you were there if it was still an escape game or a horror game or had some other story.

Then in the Spring of 2017, we demoed what we were working on at VRLA and E3.  And, older gamers would ask about the story or the goal or the point of the game.  But we found that younger players would play for 20 or even 40 minutes then leave for a while and come back and play for 20 minutes and leave and come back and play until we stopped them.

These players did not care about any goal or aim.  They just wanted to explore and have fun. One girl did nothing but break vases and plates and complained that the mugs were too hard to break.  Another opened every cabinet and cupboard and drawer and just explored everywhere.

And, we realized that was what people enjoyed.  So, we shifted focus and decided, let’s see how many fun activities we can create in as many rooms as possible. That is how Unnamed became an open ended-sandbox game.

We kept the name “Unnamed VR” in part to honor the original first VR game that Bibek and Sheetal developed.  But also, because we did not want a define anything about the game for the users.  It is up to you to create your own experience.  You can name it yourself if you like.